Yesterday on the Internet: The Handmaid's Tale 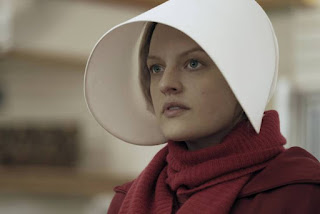 I don’t recall how I got dialed in to this show, but it’s the best thing I’ve watched in a long time. To be fair, I watch very little television, and I consider that a good thing, as the very precious commodity occurs almost never in the light switch known as a week.

It’s so freaking good, though, and of the many reasons why, one cannot be overstated: We are, in this country, insanely close to this setting being a real possibility. And if that doesn’t alarm you then you should probably consult a psychiatrist.

At this point I don’t have any intention of being an expert on the program, so the chances of me botching a detail or two are pretty high. And as of right now, I’m only toying with starting over with episode one of the inaugural season for the purposes of constructing a per-episode feature.

The skinny is more or less this, though: The United States as we know it has been taken over. Repossessed, restructured, and refashioned. The government has been overthrown and the nation (or at least a part of it) is being run by a collection of dictators and authoritarians that have basically instilled martial law.

The biggest takeaway, literally and figuratively, is basic human rights. As in, they’ve been stripped and reconfigured to only include straight males, most of whom are white.

Women have been categorized into three sectors: the fertile, those whom cannot bear children, and the rejects. The fertile, handmaids, are assigned to a high-ranking official: commanders. They live in the home with the official and his family, and they are forced to participate in a ceremony in which the handmaid lies on the marriage bed, arms clutched by the wife, while the commander pumps repeatedly until his proverbial load is dumped in the handmaid. It is, by definition, rape, and is periodically referred to as such in the program. It’s not what one might normally picture, however, if that concept is a thing you’ve either envisioned, experienced, or witnessed. It’s all in the name of procreation, which, in a sense, makes it even creepier than the definition of rape you might’ve previously had.

Anyway, the handmaid then delivers this baby and it becomes the child of the commander and his wife. The women whom cannot bear children are called Marthas. They serve as maids, butlers, assistants, housekeepers, etc. Slaves, basically. Unlike the rejects, who have been deemed rebellious, gay, criminal, what have you. They are sent to these mines where they’re harvesting something that basically dumps radiation into them and they die, which, once it’s over and done with, is probably a blessing considering how horrific the conditions are and the treatment is.

The people that commit crimes or behave inappropriately, i.e. express homosexuality, a desire to change gender, or anything outside the norm, get masked in cloth and murdered. They are hung and placed on a wall, displayed in the square like sausages in an old-time butcher shop. It is nothing shy of horrific.

And in fact, most of the show is horrific. It’s dark. It’s wickedly intense, frightening, and stressful to watch. The positives in this environment appear with four-leaf-clover frequency.

The show’s protagonist, June Osborne, displays a first-hand example of what life in Gilead (the new United States) is like. The initial episode shows her, her husband, and their daughter fleeing the country. They’re making a proverbial run for the border (in this case Canada, not Taco Bell) when they become separated. Her husband escapes; June and Hannah do not. From that point on the program centers on June’s varying tolerance of her new normal, how she combats it and in many instances, how she is consumed by it. The level of horrible she experiences is almost impossible to stomach and in a number of circumstances she doesn’t have it as bad as some of the other handmaids.

When I first discovered The Handmaid’s Tale two years ago, I consumed season one in two sittings. It’s that good. Waiting an entire year was brutal, but proved worth it. Season two did not disappoint. Stakes were upped, worse got worser, and the balance of hopelessness versus possibility was suffocatingly perfect.

Marking off the calendar days for the current season to start felt akin to trying to get the last couple of doses out of the shampoo bottle, but once it was here, it was great to be back.

Season Three has had a couple of valleys in the sense that I, on a couple of occasions, wondered if the writers and producers had painted themselves into a corner where new variations of the same theme were going to turn the show stale. Where these trajectories periodically dipped, however, the ensuing peaks have more than made up for what might’ve been construed as monotony, perhaps all of which was by design.

And now we’re on the cusp of another wait, as only one episode remains.

Anyway, yesterday’s episode (12 of 13) followed a wild episode 11 and kept up the intensity. Serious shit is taking place within the primary-character circle, and the way they have the season planned to end has likely got most viewers on the edge of their seats. I mean, that’s how these things go, right? Big to-do in a season’s closer, get you mentally committed for next year.

I’m not a television expert, but this has got to be top-notch production. The acting rings with real emotion, the selected scores scar, delight, and sometimes taint with irony. And again: The very-real, very-frightening possibility of this world shifting from construed to the shelves of non-fiction is alarming and unsettling at best. The environment of The Handmaid’s Tale is the very reason why those that preach inclusion are in perpetual clash mode with those that do not.

If you haven’t gotten on board, now’s the perfect time to do so. You’ve got the better part of a year to indulge in three seasons of remarkable television. And hey -- Who doesn't love having their life surrounded by terrifying, omni-present, indecipherable citizen's-band-radio garble?

Posted by blairjjohnson at 11:07 PM