I’m not supposed to do this for a couple of reasons: 1) their mom is worried about their social-media presence; 2) this means I have to -- to hopefully alleviate future issues of confidence -- do a post about my son, too. Which is fine. I have no problem with that and will actually long for it at some point, I’m sure. Hopefully I can get to it right after I’m done composing the Facebook photo album in his name that features 10 dozen pics of him being new in the world like I did for his sister. Then I gotta figure out a way around the time-stamp issue. Oh, the miseries of making sure your second-born is treated just like your first-born.

Anyway, my daughter’s now closer to nine than eight, and she’s so many things. She’s super-sweet and considerate. She’s empathic and considerate. She’s also wildly too old for her own age and greased with commercial-grade asshole potential that she can spray you with as though she were the sprinkler you thought you’d perfectly timed and could traverse while staying dry. It puts me absolutely off my rocker that she can literally be the best thing and the worst thing to ever happen to her little brother in the same afternoon. Sometimes within the same hour. Occasionally inside a 15-minute swing.

Regardless, watching her personality take shape has been the wildest of rides.

She is so sensitive, so cold, so daring, and so wrought with intimidation that I sincerely retrace my steps with higher frequency than I proceed with confidence. Don’t get me wrong: there’re pockets. I get her and I get her completely. In like 36-hour increments.

Roughly a day and-a-half in to having a bead on where she’s coming from is just about the point at which she’ll switch gears. Throw me a curveball. Overturn the kind of ruling-on-the-field that just sets -- via the jumbotron -- the natives into fits.

I have a good buddy. We’ve known each other since about 1982. We ended up marrying within windows of one another. His nuptials spawned the enviable; mine did something else. We then had two kids apiece: same genders, same ages. He brought up this theory to me, once and it goes like this: Every parent thanks that they have the most beautiful child(ren) on the planet. Every parent. But…does every parent realize their own bias in having that seemingly certain feeling about their own offspring?

When we became first-time parents was when he introduced this idea. My answer at the time remains steadfast to this day: Absolutely not. There are parents out there that will have a child that looks like the goddamned Chupacabra and they think their baby is beautiful.

Now, obviously this is a matter of subjectivity. There are no Olympics gymnastics judges critiquing this event, and it doesn’t really matter, whatsoever, either way. What solely matters is love and compassion and concern and well-being for your child. Growth, education, validation and understanding. Just to name a few things.

I’m sure you’ve predicted where this is going by now, and you’re correct; you’ve won the toaster oven. It’s undeniably true that I have the most beautiful daughter in town and let’s be honest, folks: the race was really never close.

I lied. There’s no toaster oven.

Let’s rehash a couple of things, though. Suppose for a moment that you read the contest’s fine print. Pretend that you feigned scrolling to the bottom of the screen. Ignore the eye roll you offered when it made you check the box to proceed to the next screen and get your daughter entered.

If you’re done fooling yourself that you did all of those things, then allow me to bring you up to speed: I’ve been a father to precisely one daughter and I passed judgment on yours based on one of two things: a) having never seen her, heard of her, or known of her existence; or b) spending 0.75 seconds looking at one of your 26 recent-vacation photos on Facebook that featured her. I never encouraged your daughter to get back on the beam after her first ferociously scary tumble. I didn’t comfort her after her first bicycle wipeout. I wasn’t there to pat her back through thunderstorms or talk her through her first social scenario in which someone else’s piece-of-shit kid made her feel bad. I never even considered coaching her up to confidence when it came to reading aloud. I never made cookies with her, and I sure as shit didn’t soothe her sorrows through a movie’s scary part.

You did all of that. And your kid loses to my kid. ‘Cause it’s my kid.

Enough of all that horseshit. Your kid’s also amazing and beautiful and intelligent and compassionate and empathic and thoughtful. Your kid’s got rock-star D.N.A. coursing through her veins, too.

This girl gets out of her top bunk every night she sleeps at my house. She exits her room, walks past her bathroom, down the hall to my room, and wakes me up to tell me she’s going potty. She then deposits “Blanky” in the chair, pees, flushes, washes her hands, and wakes me once more to ask me to walk her back down to her room and tuck her in.

I’m serene and graceful to these asks just under 10 per cent of the time, which is fine. At the onset of Fiscal Fatherhood ’19 we agreed that my goal was eight; she signed off on it.

These things happen in waves, of course, and the latest current involves the occasional substitution for the walk-back ask. In its place comes the request to get into my bed with me. And who’m I kidding? An unprompted opportunity to cuddle? Even if it’s only 45 seconds before one of us falls back asleep? I’m on borrowed time, people. I reckon I’m two summers away from drop-me-off-here land.

Anyway, this girl has the proverbial steel trap. Trying to slip something past her is like calling up a high-school sophomore to Major League Baseball and trotting him out there for 182 games in consecutive seasons. That batter has gone 0-for-1,480. This, while reading society as though she’s Neo interpreting the world as Matrix coding. And let’s not forget that she’s a serial stalker. Out in public walking your dog? Driving down our street? Thinking you’re having a moment with friends on the other side of the glass in that restaurant?

Notes. My kid is taking notes. About you. And those pages of chicken scratch’re getting logged in the Jedi Archives, bruh.

She’s fucking bananas. And I love her so much it makes me want to burst. Hopefully by the time (assuming that ever happens) she stumbles across these words she’s made peace with the horrible mixed message I’ve anchored in her brain: profanity is horrible, yet tons of perfectly wonderful people curse and nothing bad’s meant by it. Sorry, honey.

The point, though, is that she started gently -- yet with admirable consistency -- clawing my face at about 4:00 this morning. I handled it like the perfectly calm, sensible father I always am, waking or sleeping. And if you believe that I have some five-cent avocados you should purchase.

Dust settled, though. Sun beams too bright too ignore. Chore/work list growing with every passing tap of the “snooze” button, this is what I woke to: 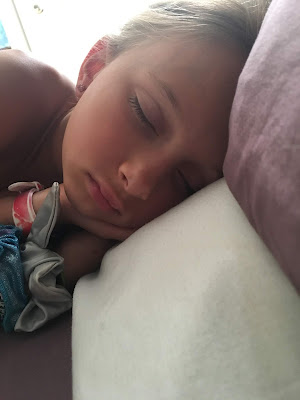 I don’t know what you do with that. Give thanks, I guess.

I try to, anyway. All of the time. Sometimes I hate how invested in them I am because when they hit me with one of their 68 allotted poison darts per week, I definitely go Frank the Tank: “I-- I like you, but you’re crazy…”

It’d be weird, I guess, if fatherhood had a manual. I wouldn’t want to eliminate the joys and the surprises, the elation and the love.

Posted by blairjjohnson at 10:55 PM