Behind on Laundry, The First 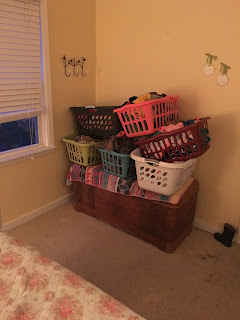 I haven’t fleshed out what this series is going to be about, but off of the cuff I think there’s a literal and a figurative hybrid behind the motivation.

By that I mean that right now I am remarkably behind on laundry. Both hampers in my room should have already been transported to the basement and appropriately sorted. There are six baskets of clean, terribly wrinkled clothes in my guest room that need folding, put away. This is not how I’ve been accustomed to managing laundry for most of my life. In the worst of times, the contents of three unfolded baskets would trigger my anxiety, but the only thing this particular state of the state is harming is my ability to be ready for the day and out the door a couple of minutes sooner.

Laundry’s not the only thing, though. I’m behind on the completion of my to-do list, the creation of the next one(s), bills, exercise, and, above all, piles.

If you can relate to the piles piece, there’s love in my heart for you. If you don’t know what I mean then you, my friend, have really got life figured out. Or at the very least I envy that element of your existence.

I think what I’m getting at is angst and the bizarre comings and goings with my willingness or ability to tolerate it, shrug it off, or let it attempt to consume me. On most days it feels like the day itself is completely doable. There’re logic and reason, start times and deadlines, and bare necessities that seem to govern the bulk of things between wake and sleep. And a lot of the time I’m fine -- or at least I’ve convinced myself that I’m fine -- to just plow through it all, head first, correcting mistakes both on the fly and after the fact.

There’re other times, though. And it’s occurring to me that those other times are often fastened to the absence of my children. There aren’t immediate needs and schedules pinned to every hour and so the collective can kind of sneak up, huddle around, linger.

Managing life is an imperfect art, is, I think, the gist of it all. Maybe learning to clumsily dance along with that art is the answer. It sure doesn’t feel good sometimes, though.

I’ve been trying to implement a few new changes to my household, possibly because I wonder if they’ll make me more comfortable in my own skin. For example, I randomly suggested to my daughter that we could try to become a shoeless household, which she jumped on, so we’re doing that, which has made me begin to sweep my kitchen floor every day because the feeling of crumbs under your bare feet is super annoying. I’ve been putting effort in to giving my smoothie preparation extra blend time so that both of my kids will down a small glass. At least that way they’re guaranteed to get some greens in to their system once a day.

I’ve seen some improvement in them picking up after themselves, requiring fewer reminders to do so, and through all of this there seems to be less bickering in general. Of course summer is slamming shut and what that looks like once the screen-time allowance all but vanishes and bedtime reverts back to an earlier hour remains to be seen.

Somehow I’ve conjured the discipline to put my butt in this chair enough to get some recent words onto paper. I’ve booked a couple of flights for upcoming trips and am slowly watching a vision unfold in terms of what I’d actually like the inside of my home to look like in terms of cleanliness and organization. Still, though, Friday’s work tends to spill in to Saturday, making Sunday come too soon. I worry about things I probably shouldn’t, like whether or not my yard is getting the proper amount of attention or if my kids are getting enough outside time. I wrestle with bouts of loneliness and feel hyper-critical of some of my less-than-healthy life choices.

I think, though, what it boils down to, is that I’m afraid of death.

Not in a sense that it petrifies me or that I feel somehow empowered to control or avoid it. Instead I just stress about the possibility of my time coming quote/unquote too soon, that I won’t live to see my kids graduate high school or college, marry and have kids of their own, become professionals and find their own ways in the world. I worry about whether it’s warranted that I worry about publishing, whether that benchmark deserves the level of esteem I’ve assigned to it.

And I worry, in general, about being calm, content, connected and happy.

I suppose, though, that those over-arching, broad-and-general concerns manifest themselves as angst over laundry, crumbs on the floor, and making sure there’s not food going to waste in the fridge. Sometimes all of those things feel very warranted and legitimate; others it seems foolish when there are so many other grave problems in and around the world.

Anyway, I guess this is all just a game of chips and putts. Sometimes you can crush a drive, but more often than not you’re in the rough or dropping a ball and taking a stroke penalty. Maybe life is about how you manage all of your scenarios on both an individual level and in a macro-sense. Perhaps each phase of life is like 18 holes and it’s up to each of us to develop patience, master techniques, and approach the next round with a keener sense of savvy.

For now, though, I guess I’ll get after a basket or two. Not that it wasn’t obvious before, but I’m painfully aware of the fact that that shit ain’t gonna fold itself.

Posted by blairjjohnson at 3:17 PM