Dream Fiction no. 5: The Hatchback & the Quart of Breast Milk 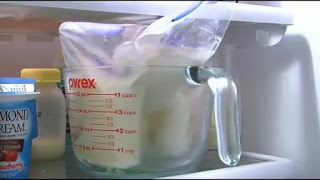 It was pretty goddamn cold out. Not quite to that level where you’d roll your eyes at a friend who claimed it to be freezing, but still. It was that moisture-level cold where it felt 20 degrees colder out than it really was. Not the take-your-breath-away cold but the kind of feel-it-to-your-core cold, where -- even after half an hour inside -- you just couldn’t seem to warm up.

I’d lost track of what city we were in or near; the exits had started to blur about 10 minutes ago. Maybe more. I think we were somewhere east of New Brunswick but I coulda sworn we still hadn’t seen the signs for Edison.

Regardless, I hadn’t slept since Tuesday. My phone had been missing since the sushi place and so I’d been trying to do the backwards tally, to figure out if it was officially the weekend or not. I could still smell the ginger and my brain kept flashing to the greasy-looking Polish guy that was 100 per cent paying that girl he was with for company.

She was so hot that, even in my delirium, I couldn’t stop staring. I knew the league separation between a girl like her and a guy like myself, but she’d been so stunning in that light-blue dress, her tanned skin contrasting that, and her dark hair contrasting that. I still insisted it’d been Amanda Cerny. The danger and adrenaline associated with our exit had aggressively encouraged everyone in the Citation to tell me in unison to shut up. My mind wouldn’t leave her, though, and my ego had seemed to not care that the continued, obvious looks directly at her were belligerent and turning any of the faintest hopes of engaging with her in to the last few particles of dyed hourglass sand.

She’d been there, though. It’d been her. I was sure of it. The brain slipped from one tributary to another, bouncing like a missed shot that’d rimmed hard and was working its way to the edge of the driveway, destined for a grassy resting spot. Now it’d lodged on the vehicle in which we raced: a 1983 Chevy hatchback that made me think of my grandmother driving us with feverish carelessness around Sarasota. I couldn’t shake the Inceptionish sequence of us plummeting through the open gap of Siesta Key Bridge and every time I’d wrest my anxiety free from the imagery her voice would reinsert the trauma with a hate-filled finger jabbing at the FM-radio preset button. I couldn’t believe she’d dissed The Doobie Brothers. The Doobie Brothers!

“Gawd,” she said, plucking the crescendo of “Listen to the Music” out of earshot. “They just keep saying the same thing over and over.” She’d landed on Louie Christie’s “Lightning Striking Again” and, ironically, she stuck with it.

Whatever, Nana, I remember thinking. I don’t remember Tom Johnston calling you up for any songwriting sessions. And besides…it’s The Doobie Brothers. Haven’t you ever heard “Jesus is Just Alright” or “Black Water”? Christ.

Amanda Cerny, though. She’d been there. I couldn’t imagine her needing greasy-tux guy’s money. She’s loaded, isn’t she? She for sure is. I may as well’ve been wearing sweat pants and a stained t-shirt. I may as well’ve been standing there in a pair of ratty briefs leftover from seventh grade. Maybe add an I-passed-out-and-my-friends-Sharpie’d-a-dick-on-my-forehead tattoo. The crazy thing was that she kept looking back. Not like she wanted us to turn off nightstand lamps together, but because she felt like she knew me. And I could tell it bothered her company. He threw a fairly conspicuous head nod in my direction while his fat left hand rested at the base of her neck. He even shot a puff of cigar-smoke exhale straight at me a few minutes later. I wanted to rescue her. I wanted her to ditch the modeling gig, the digital presence, the prestige. Come live with me in Maldives. I’ll get in shape, get my teeth fixed.

She was gone again, though, and now the presence of guns in the vehicle registered with me once more. I drifted down the avenue of wondering how long I could actually drag myself through alleys in the dark before I bled out from being shot in the leg.

Ives blasted the brake pedal, causing the car to offer a movie-scene screech. Ethan’s door was open before we stopped moving and, faster than I could look over my shoulder, the sound of his dress-shoe footsteps vanished in to the evening.

“What the,” I started. I jerked my head back to the front seat and assessed as Ives fumbled for something in the glove box. Before I could formulate a question he was sprinting toward the bike rack in front of a building that had a Garden State CrossFit sign on the door. A couple of receipts fluttered from his arms-folded clutch.

A cruiser. He chose a light-blue cruiser with a basket and crammed all of the paperwork into it. A few more pieces of paper fell, leaf-like from the haste. I found my gaze fixed to the bike-frame’s tone: a perfect match to Amanda Cerny’s dress, which likely still adorned her spectacle of a frame, mocking me, even in my absence.

“Billy!” I glanced in exhaustion at Melissa, who fidgeted with the front-seat-release mechanism before freeing it. The driver chair slammed forward. “C’mon!”

When I stepped out into the cold air I felt less drugged than I had in the back of the car. Standing behind it I couldn’t stop the paranoid head pivots until it hit me: We were totally alone. We were on our own. We didn’t know where we were (I didn’t think) but I knew we had to get the fuck outta there.

It was just us, though. No sense and no real way to protect ourselves. Us. The hatchback and the quart of breast milk.

We couldn’t go back to the motel. It was too risky. The security. The alarms. The necessary counter actions, the reverse sleuthing, and that Gregg Allman-looking motherfucker needing to convince us that he’d backed off.

Posted by blairjjohnson at 10:59 PM