While there are many things I'm grateful for in here and in this entire series, I am especially grateful this morning that my sister is home, has rested, and is feeling better.

Here's to having a tranquil Tuesday.

I’m thankful that my genes, my hormones, my environment, my experiences, and everything else about me that I’m unable to recognize made me comfortable with the fact that I was born male. I can’t imagine what feeling like -- or knowing -- you don’t belong in the body you were given is like.

I give thanks that I was born heterosexual. I give thanks for that because it -- over time -- has felt hard to make connections with the people to whom I’ve been attracted, and I’ve done so, with both successes and failures, under the umbrella of society’s norm. We’ve made recent progress as a society, but if the way race in this country has “progressed” the road ahead is many things, and above all, long.

I give thanks that I was born…Anglo? Is that what I am? Caucasian? Euro-American? White?

Whatever it is that I am, I’m glad that I’ve not walked every step of my adult life feeling that, in no uncertain measurement of time, my people will be extinct. And by “my people will be extinct” I don’t mean that anyone’s worried about a shortage of white people. I mean that I imagine it to be depressing to be Native American, for example, and face the everyday reality that your lineage may one day exist only in history books.

Seventy-Two: being close to innumerable women who have birthed

I am grateful for having known and loved my grandmothers, my mom, my stepmom, my mother-in-law, my wife, my soon-to-be-mom sister, countless aunts, cousins, friends, and neighbors who have been blessed with the gift of giving life.

This lady held the general-manager position at a pub and grill in Durango when I moved there. She gave me the much-needed opportunity of obtaining employment. I took it, I ran with it, and because of it, I supported myself in my college town. I’ll always be thankful that she needed people, and that she took a chance on a homeless hippie.

I don’t think I’ve all-the-way grasped everything I learned not just from this Fort Lewis College English professor, but because of her, too. Maybe one day it will all sink in, but she -- in a mostly vicarious fashion via her other students -- taught me a different way to see the world. For that I am grateful.

This lady served as the advisor to The Independent before Faron Scott took over, and Ann Bond did her job with kindness, professionalism, integrity, and compassion (not just for the job, but for the people doing it that she oversaw). I needed all of those things in the fall of 1995, and I’m thankful I met her and benefitted from knowing her.

When, as a freshman in college, I got my face broken pretty good, I needed support and empathy. Beth provided that. I’m sorry I don’t remember your last name, Beth, and I hope your first name was Beth, but thank you.

This kid lived below me for a minute while I was in graduate school. He was an activist then. He’s an activist now. He’s into music. He writes. He wants the country to get better. We didn’t get to hang out a ton, but we had enough in common to message each other on MySpace when the evening called for front-porch Jager Bombs. He recently lost his father and I hope this entry finds him healing.

Unnamed friend number 37 is good people, and I’m glad I had the luxury of living above him long enough to call him a friend.

I don’t even know where to start with this lady.

I feel like I had to work pretty hard to earn the title of her considering me a friend, and I’m not even certain I’ve earned that today.

All of that goes back 20 years, though.

I’m so glad I met unnamed friend number 38. I’m so glad she married my friend, and I hope that right now, at this moment in her life, she is happy. If I've ever met anyone that deserves it, it’s her.

I met this guy on a whim and we traversed half of the country together in a few days’ time. Because of him I had the adventure of a lifetime. I haven’t seen him since, but I give thanks for meeting him when I did.

Thank you for showing us that silliness, rhyming, and cool pictures have a place in literature.

I don’t know enough about this guy to do his life, his body of work justice in an entry, but I do know he resonated with me, that he was important. This piece made me remember him the first time:

Mother to Son
“Well, son, I’ll tell you:
Life for me ain’t been no crystal stair.
It’s had tacks in it,
And splinters,
And boards torn up,
And places with no carpet on the floor --
Bare.
But all the time
I’se been a-climbin’ on,
And reachin’ landin’s,
And turnin’ corners,
And sometimes goin’ in the dark
Where there ain’t been no light.
So boy, don’t you turn back.
Don’t you set down on the steps
‘Caus you finds it’s kinder hard.
Don’t you fall now --
For I’se still goin’, honey,
I’se still climbin’,
And life for me ain’t been no crystal stair.”

Messed up dude. Writing machine. Thankful for his hard work.

Same thing as Hemingway, minus the messed-up-dude part.

There’s some down-home, original, good-laugh material happening on this dude’s timeline. Give him a follow.

Fifty-Nine: the key to happiness

I know -- via this project and by looking around -- that it’s out there. I’m thankful for that knowledge. I’m not sure if I’ve been looking in the wrong places or if my problem is that I’ve been looking period. Perhaps its’ both.

This means football season is really close, which means another Kansas City Chiefs campaign will soon launch, which will give me that glorious feeling of one day witnessing a championship. I just like that feeling. 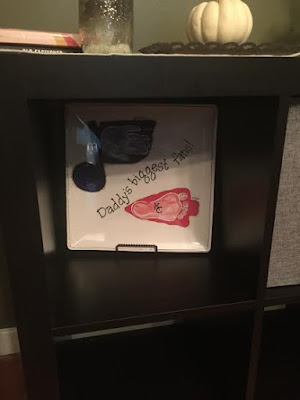 Whether it becomes a display or something utilitarian, I give thanks for this cool platter.

Fifty-Three: all the people that have -- over the last 10 years -- wished me writing success

That was some serious comfort-zone time for most of a school year. Grateful for the experiences and the memories.

Fifty-One: a reminder that the today’s youth isn’t just living their lives on their smart phones:

Posted by blairjjohnson at 9:28 AM