Feels pretty weird to have broken into the 10s.

I'd hoped to close this project out with some huge, meaningful, eye-opening, worldly gratitudes, to get outside of myself as I mentioned I'd do.

That didn't happen, though.

I did my best, and this has been quite the journey.

Thank you for being here with me.

Had a lengthy chat the other night with one of my best buddies. Always great to catch up, but even more important when a pal copes with tough times and you can be an ear. Grateful for technology, spare time, and long-term friendships.

Ninety-Nine: watching fans of the opposing team head for an early exit

Don’t want to be boastful, but you know what they say about winning.

I’m far from a fashion king, but I’m grateful that some people do things that serve as a reminder of what not to do.

We got invited over to a friend’s house for dinner a couple of Sunday nights ago. I’m not sure how it happened, but we discussed the notion of both of our families already looking at November as the next available chunk of time where there’re no plans. It’s tough to get together these days. Small children and two working parents absorb a lot of the calendar dates. When we can make something happen in spite of all that, I feel grateful.

Ninety-Five: the idea of a wellness coach

I got a phone call a couple of weeks ago from an insurance representative who asked me -- based on my medical activity this year -- if I was interested in speaking with a wellness coach (Note: They either called it that or I’m making it up.). I said yes and when she transferred me I spoke to this dude for probably 20 minutes about the things in my life I’d like to improve. He provided me with some resources, sent me a couple of e-mail messages, and said he will be in touch.

I like the idea of an employer and its insurance company doing that. And not that I don’t have family members who care; I do. It just felt cool to think that someone else out there in this big, big world cares, too. Or at least appears to by virtue of his/her job.

Ninety-Four: having a money person

The money person we have now spends more time with us; he says, “Make more money and spend less.” He also gives us resources, though, and tips, and advice. It’s nice to have someone in your corner that gives you a little confidence regarding the dark-and-treacherous student-loan mountain before us. I’m thankful we’re in a position to talk to somebody about how to solve our financial problems.

Ninety-Three: another magical evening with Phish

My favorite band played in Kansas City two Wednesday nights ago. These guys are the gift that never stops giving.

Our son came down with the Entero Virus a couple of weeks ago. He puked all over our friends’ home (Note: Sorry Smiths.), on our family-room floor, our family-room rug, and in our downstairs tub. He shook the thing in time for school Wednesday, but by Thursday evening our daughter puked in the downstairs bathroom, in our sink, on the kitchen floor, on her floor, in the hall, and about 10 times in her bathroom. She missed school Friday, felt crummy Saturday morning, and by Saturday afternoon had all but returned to her normal self. It’s pretty shitty to watch your children suffer, to watch them learn the importance of making it to the toilet. 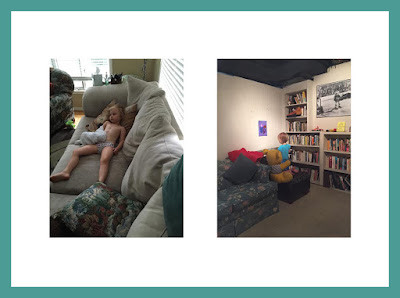 It’s pretty great to see them come around again.

I’m writing this one blind because I really don’t know, but…I do know that I cannot open Facebook anymore without coming across at least one story or clip or photo of police wrongdoings against -- what almost always appears to be -- African-American males. It makes me sick to my stomach and embarrasses me to live in a country where people continue to get harassed, assaulted, and murdered by the people paid to protect civilians. I don’t say this with the intention of getting up on a soap box. I’m just glad none of the reported stuff has been in our town…yet.

Had the pleasure of seeing some great friends -- and many others I seldom, if ever, see -- at Phish. Our brief stop at a tailgate party hosted by the McCaffree siblings was nothing shy of awesome and hilarious. The Kid made luxurious grilled cheeses for anyone with an appetite; Mrs. Locke had her trunk open and handed out “9:30s”; the eldest maintained his usual, quiet demeanor while his better half, uh, did not. We all had the post-show luxury of seeing her backside a solid three times.

Don’t get to see Dan and Melanie often. Always a blessing when we do.

My post-show shenanigans could’ve cost me my liberty, my home life (as I know it), and my job all in the same breath. Thankful it didn’t.

Eighty-Seven: the ability to occasionally work from home if need be

Nobody needed to see me, smell me, or have me on the road on Thursday. Luckily I was able to phone the day in.

Can’t take credit for the saying, but it’s a beautiful thing.

Eighty-Five: when work problems get righted

I’ve probably said it before, but there’re many moving pieces to making my job happen the right way. Mistakes happen. Sometimes they don’t get fixed; it’s nice when they do.

Neither of these kids are on pace to win any awards, but they love to cut a rug. Pretty funny.

Wish I could quit you, fountain drinks. Why you gotta be so good?

Eighty-One: political apathy for such things as the Republican debate

I don’t need any more reason to hate, so I’m thankful I have zero interest in viewing.

Eighty: seeing people on social media seeking Royals tickets because the box office has sold out

Seventy-Nine: learning that my sister-in-law’s boyfriend is way into reggae

Seventy-Eight: having a visit from my sister-in-law

She recently had a really crummy accident that effed her left ankle up good. Getting around and doing things and just making life in New York happen has been pretty difficult. She was in town last week and, while it’s always nice to see her, it’s especially nice to see her in good spirits right now.

Seventy-Seven: the 7-11 owners around the corner from our house

This guy has owned this place and run it for most of 20 years, if not more. His sons work there, and I know it hasn’t always been easy for them, but they persevere, and I’m grateful that he has never given up.

I know, kiddo. I know.
Posted by blairjjohnson at 9:43 AM