These things...they come and go in waves.

One Hundred Fifty: becoming an uncle

It hadn’t really hit me until just before we left for Chicago, but I will be an uncle in less than two months, which might be one of the coolest things ever. Very grateful.

The lovely Facebook has afforded me the opportunity to reestablish contact with my favorite people from my social-work days in The Dotte. Very cool. Very eager to see them soon.

I had a small epiphany the week and it had to do with the lengthy list of things that tend to tick me off around the house. In particular I chose not to get upset about a couple of things and I enjoyed that. Here’s to choosing to make it a trend.

One Hundred Forty-Seven: the feeling of finding out you’re not getting fired

I got an odd message from the director of Human Resources a couple of weeks ago asking me for an impromptu meeting the following morning. She claimed I wasn’t getting fired. She said I shouldn’t worry. I wish she would’ve told me those things before I got all freaked out. Either way, I’m glad I didn’t get fired.

I won’t pretend that Eric Berry’s story carries sorrow and sadness greater than that of anyone else who has suffered, but he was already a very likable player before his diagnosis went public. Equinophobia or not, Berry’s a badass. Grateful for him, his family his friends, and our team that he’s back.

One Hundred Forty-Five: that morning schedule

At the time of writing this I’d probably been up early enough to write nine of the previous 14 days. Good feeling. Can’t wait til I can say 12, but I’m grateful for the progress.

I could probably write five or six on this dude, but I’ll keep it concise:

Something about the way he carried himself at his introductory press conference nine years ago hit home for me. I felt like he was a good dude and a guy who would bring success to the Kansas City Royals.

He took a huge pile of heat along the way and I stood up for him 10 out of every 10 times. Last year’s post-season was such a blast. I don’t think I’ve ever seen this city come together like that. We got our first taste of Johnny Cueto the other night and we’ll know in a month or so how the Ben Zobrist thing shook out (Note: So far, so good.).

Tremendous amount of respect for Moore, though. As the late Stuart Scott would say, “Cool as the other side of the pillow.”

I won’t try to do his style, his success, his wit, his inflection, his intelligence, his courage, his strength, or his fatherhood justice here in this entry, but I will say that I’m thankful for all of the years I got to spend on the other side of the television set from him. He will always be the SportsCenter icon in my mind. He will always be someone to admire.

Always had a crush on this gal. Always think she does a tremendous job. Glad it was her to set the bar for female sportscasters

One Hundred Forty-One: my family by marriage

I gave this dude a very quick shot the other month.

Maybe someday I will. Meantime, though, I’m glad there’s a dude that’s bringing happiness to so many people.

If you ever have a television show and someone tells you you can't say a certain word on that show, you should totally make an episode in which you say that very word as many times as possible and you should totally have a little counter in the corner:

Very interesting band. I’m’a dig into their stuff a little deeper one of these days.

One Hundred Thirty-Seven: My semester with New Letters

Call it an internship, call it a class. Either way I spent most of five months working with Bob Stewart and company on the University of Missouri-Kansas City magazine. And it was awesome.

One Hundred Thirty-Six: thinking about gratitude

I’m grateful for the recognition that this isn’t about making a list. It’s not about worrying over coming up with enough things. Instead, it’s about noticing that my 2014-15 list differs from what my list might’ve been in 1996-97 and what it might look like in 2037-38. It’s about being thankful for what you have, what you don’t, what there is, and what you can make.

One Hundred Thirty-Five: having on-the-block babysitters

One Hundred Thirty-Four: the Parkinsons

This token Durango family was the best set of landlords I ever had. Well…aside from my in-laws, of course.

It will never be the same as it was in high school, but it still feels good to get to Friday.

One Hundred Thirty-Two: recognizing the good and the bad in smart phones

I’m grateful for my own awareness of the amazingness and the curse that is the smart phone. I hope everyone else does, too.

At some point in the middle of my Kerouac phase, I realized that I liked Kerouac as much as I did because people like Gary Snyder had been in his life. Grateful for that, for the energy that Snyder seems/seemed to carry, and I’m grateful for his writing. In it I discovered a value set I respected and I like to think it had a positive influence on me.

One Hundred Thirty: getting somewhere

I don’t want to say that this has come to feel like a chore because it hasn’t. I do have that feeling now, though, where I can see the final strips to mow. I can see the bottom of the laundry basket, and I can tell how many more bags it will take to finish raking this lawn. It’s a good feeling and I’m thankful for it.

My coffee-mug collection kicks some serious ass but my Fighting Irish vessel might be my favorite. I procured it from the campus bookstore on a visit to see Megs, and, for some reason, tasked Tiffany with carrying it around for me. In a fit of laughter she dropped it. 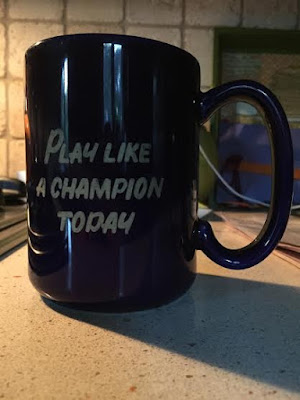 This came at the end of a long day of trolling around the university grounds and my stepmom insisted that we go back and she insisted on buying me a replacement. That was like 11 years ago. Lotta feelgood in this handled piece of porcelain.

One Hundred Twenty-Eight: the smell of real detergent and fabric softener

While we were in Chicago, Megan washed a load of all of our clothes, and, well, pardon me while I channel my inner Frozen:

“For the first time in forever,” I’m wearing the wonderful fragrance of real detergent. I don’t care if it’s bad for me or my kids or the environment, ‘cause Goddamnit it smells good.

One Hundred Twenty-Seven: my Central- and South-American colleagues

I’ve been getting to know some folks from the Dominican Republic, Honduras, and Ecuador in recent months. Good people and nice to interact with a few non-Mexican Latinos every now and again.

One Hundred Twenty-Six: my teeth

My chompers are shitty, but I’m told they won’t fall out. If I live to be old I should still be able to eat, which is a good thing.
Posted by blairjjohnson at 7:27 AM