With this installment we dive into the 100s and -- in case I haven't mentioned it -- I've stayed 100 entries ahead of what's posted since the beginning. I chose to do it this way so that I never felt forced to write then post, just for the sake of posting; the writing was meant to fuel the posting of what had already been written.

That said, I am down to the final 100 gratitude entries to write and I hope to carry the momentum of this project into the next project while rounding out the final seven posts to the series.

If I could only figure out what that project will be...

The direction I'm leaning suggests that I'll skinny back on the blog stuff and work on something I might be able to publish in the traditional sense. So in the event that the blogginess falls off as we enter fall, I hope that you'll still visit once in a while. If you don't, that's okay, too.

Thanks, though, for being here when you were.

I don’t want to speak for everyone in my class, but I think this album lands at the top spot as an anthem and as a soundtrack for our high-school years. Epic records like this one come out but a few times a lifetime and I’ll gladly claim this one as one of ours.

One Hundred Ninety-Eight: The Miseducation of Lauryn Hill

I had to divorce myself from this album for a number of years because I listened to it too much. Wow, though. Amazing record. Still got that it.

Nothing says “schmoove” like a record from these cats. So awesome.

I like light and refrigerated food and toasting bread and plugging in my stuff. Our lives are easy. Be grateful.

These folks cut two albums before Fergie joined, so if you didn’t know that or haven’t heard them don’t judge. Also, they wrote some good songs with her in the mix, too.

Speaking of women that ruined bands: that early Fleetwood ruled. Thankful they recorded before that goat joined.

One Hundred Ninety-Three: “Two Versions of Me”

Ten mountains stand tall,
Nine seasons since fall,
Eight eons of sand,
Seven oceans began.
Now there is none,
No more light from the sun,
Now waters run free,
No more fish in the sea.

One more name on the slate,
One less minute to wait,
Too busy to see two versions of me.
One more bottle is dry ,
One less reason to try.

Six feet underneath,
Five fingers don’t reach,
Four seconds it seems for all of our dreams,
Three oceans away,
Two children at play,
Too busy to see two versions of me.

One Hundred Ninety-Two: my library

I like to think that I will read all of my books before I die. Whether I do or not, I’m thankful for all of them. My collection makes me happy.

One Hundred Ninety-One: that feeling of hearing a song for the first time and knowing you love it

It warrants a repeat. She’s too big and too old and too sensitive to be dealing with my short-sightedness. We had a moment the other night where she threw herself on her bed because I upset her. Afterwards, when we talked about it, she told me that “Me and Mama and Elihu have a hard life.”

I told her I didn’t think that was true and I apologized for snapping at her.

I hope she doesn’t think they do because of my frequent lack of patience.

One July morning in 2005, Anna and I woke early and departed our Arizona campground for a journey to watch the sun rise from atop the Grand Canyon. We didn’t have the greatest view and it wasn’t all cinematic and jawdropping, but it was -- nonetheless -- pretty cool and I’m glad we did it.


One Hundred Eighty-Four: the day that Phish tour starts

That day happened two Tuesdays ago, which means they’ll be in town soon.

I once started a blog based on trying to get Pete Rose reinstated in Major League Baseball. It didn’t last long, but I enjoyed it. I’m thankful Rose played the game, and that his play warranted the nickname he earned. I still think a lot of ball players today look lazy on the field and the lackluster trot down the first base line on an infield grounder remains the worst. I’m thankful for Rose’s example of how to play the game.

I mentioned the guy behind the @MySecondEmpire twitter handle 785 entries ago, but I bring him up again because he sometimes tweets wisdom to the aspiring, and I appreciate it. I think there are a lot of people out there in positions similar to his -- he writes (or has written) for Esquire, ESPN the Magazine, Grantland, and himself, among others I’m sure, and every once in a while he’ll put a writing “rant” on Twitter. He doesn’t have to do it. He doesn’t have to have the thoughts. He doesn’t have to care. He does, though, and he’ll answer the occasional tweet as well. His writing advice is sometimes addressed to “young writers” and sometimes it isn’t. I like to think his words can be applied to just about anybody if you adjust your reading perspective.

Here’s his rant from the other night: 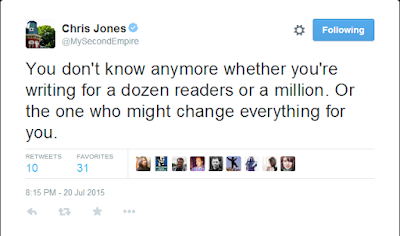 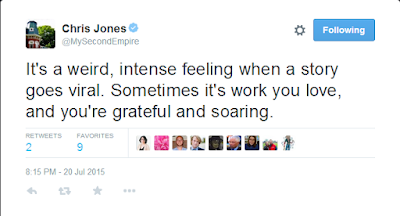 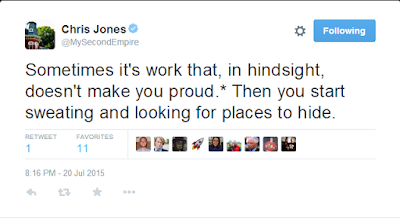 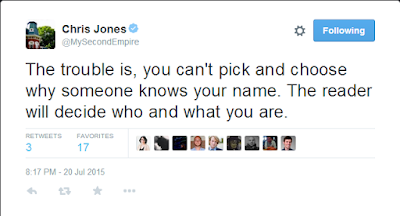 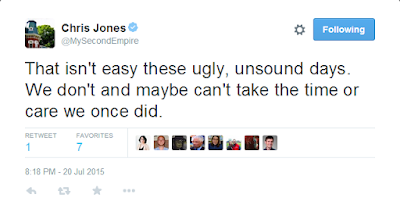 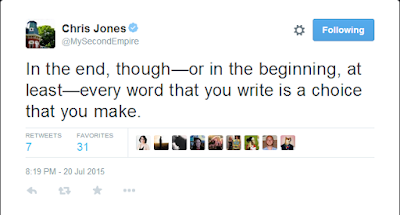 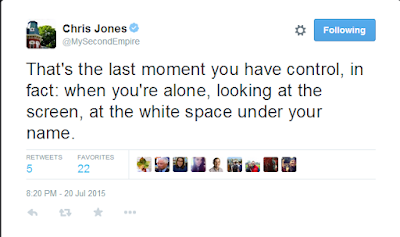 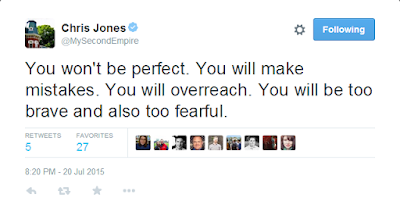 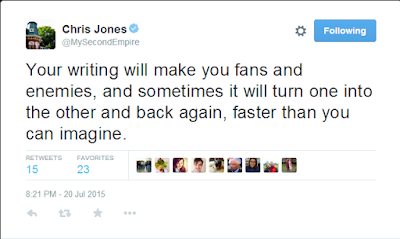 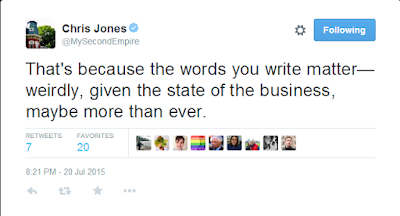 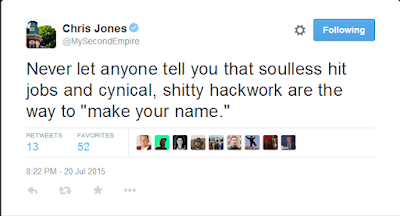 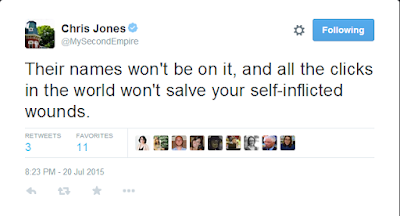 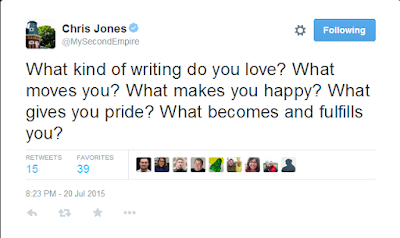 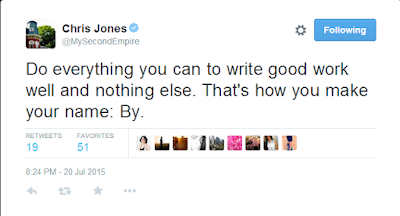 So many colors. Such constrasts. The split of life and death. All that that is neither.

I give thanks to the lady that put this idea out there first. I’ve only dabbled in what she’s got out there, and I think there’s both difference and similarity in what she’s done and what I’ve been working on here. Whether she would want it or not, she deserves credit for the notion, the energy that recognizing gratitude gives to your life.

I have found that -- with regard to people, places, and things -- a sort of epiphanal thing happens from time to time when a thing you have always loved (and maybe even taken for granted) shows you a new way in which you love it. For experiences like those I give thanks.

Thanks, Mr. Cash, for the songwriting blueprints you left behind.

Never listened to the original Williams, and Hank, Jr. convinced many of us, I would imagine, to never bother with him, but Williams III…I had to be sold. I had to be convinced. I had to overcome stubbornness. Dude’s stuff is rad, though. Grateful for the nudge, the willingness, the results.

One Hundred Seventy-Six: when people write inside of a book gift

I just like it.
Posted by blairjjohnson at 11:05 AM