Phish extends their studio-album-producing run to an impressive 27 years today by releasing Big Boat, their 13th record, and what a fascinating mix this baker’s dozen of LPs comprises. 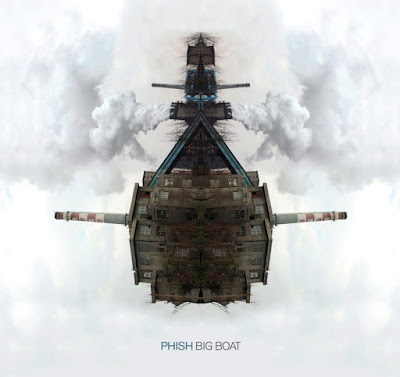 Fan staples that almost begin and end with the group’s first four productions have stood more than the test of time; they define the outfit’s roots and serve as the diehards’ safety net.

Lovers of the Burlington, Vermont quartet’s produced work have walked an interesting line with the band since 1994, when Hoist -- which has now all but worked its way into that early-era protected zone -- cocked many a head upon arrival. Its release preceded the group’s first official live-recording album, an effort to perhaps aid the non-committed in “getting it,” and while the band would try this once more two years later, the gesture -- in the eyes of the devoted -- fell to the shadows of the three studio home runs released in 1996, ’98, and 2000.

In essence, Phish produced seven records in a 10-year span after their studio debut, and if the fans were the ones recording the official stats, the band was slugging close to 1.000.

At the dawn of the new millennium, however, things in Phishland had shifted, and the early 2000s, bore their weakest studio efforts, Round Room and Undermind.

While music fans and band aficionados should not overlook these two efforts (each contains its share of gems), only five cuts from both records make the current regular live rotation.

Undermind’s release came on the heels of an announced breakup, which surprised fans considering the band had just taken a two-year hiatus between 2000’s Farmhouse and 2002’s Round Room. The real surprise, however, surfaced when this second departure came to be known as the “official” breakup, which ran most of a five-year course.

When the band reappeared with Joy, in 2009, the reviews, as they say, were mixed.

Phish frontman Trey Anastasio had risen from the depths of a substance-abuse spiral and this newest record featured a clean foursome. While the lucidity revealed itself in the compositions, many lifelong devotees found the new record lacking in the punch department. Seven of the cuts have made their way into the regular rotation, and albeit seldom for the remaining few, all 10 songs have made their way to the stage.

The aftermath of Joy yielded an impressive stretch of some of the band’s crispest and strongest live performances in their now 33-year existence, and though that energy has not tapered, a curiosity surfaced regarding whether or not any studio fuel remained in the proverbial tank.

The band answered that question in 2014 with Fuego. While the record proved strong and original, it included a chin scratcher or two that some fans considered -- for lack of a better word -- soft. Reviews tabbed Fuego everything from average to better than good, claiming Phish “mostly nail(s) it,” that it “ranks among their best studio albums,” that it “has much to applaud.”

Twenty-eight months later, they have delivered Big Boat, and it opens with the punkish “Friends,” a Jon Fishman-penned cut that all but earns title-track honors. And what an opener it is.

Punchy, blunt, and frank, the band’s drummer informs listeners that the atheists have had it right all along…or have they? Either way, our existence remains but a speck in something greater that remains undefined.

Track two offers the first of a few that fans have already enjoyed live in “Breath and Burning.”

Wasting no time off the blocks, some calypso-like acoustic strums from Anastasio beckon gentle organ pipes from Page McConnell while Fishman’s backbone and Mike Gordon’s liquid-popcorn bass plucks build this fresh number into a jazz outfit with some guest horns. With this number the band has set up some immediate contrast via the darkness of the album opener and the brightness of the second song. The composition doesn’t lack hints of nihilism, but the bits of bleakness get overlooked by positivism, the highlight of which resembles a fan-base/Dylan Thomas shoutout.

“Home” offers the first of three McConnell cuts on the record, unchartered waters for the fashion-savvy chairman. This one also opens with a cutting tempo and doesn’t stop to catch its breath. Gordon explores the perspective that the road and travel have created for him, and while “Home” rolls along in pleasantness for its first few minutes, it dips into a Phishy atonal cavern, peaks with a breath of gorgeous foursome vocal harmony then steamrolls into one of those capture-the-live-jam-summit attempts that, well, doesn’t do the song any favors.

Like all Phish experiments, though, survival triumphs and the record drops smack into “Blaze On.” The band ran this one out a number of times on the road, and for good reason: the groovy, smile-inducing, upbeat cut comes with humorous lyrics, life lessons, and inspiring imagery that will set any room to toe-tapping.

The positive flow continues with more horns, soulful keys, and the uplifting groove of “Tide Turns.” Anastasio’s voice soothes in this existential melody; his gentle pluckings blend in with warm choral backing vocals, a cozy blanket for humanity.

McConnell’s second cut comes in the form of “Things People Do,” and this ditty allows the author to stage his unique side. Employing some accordion-sounding steel-guitarish chords, recording-equipment fuzz, and a bed of background silence, track six uses social commentary to stand as the band’s token “fun” album number.

From the semi-silly to the serious: “Waking Up Dead” stands not only as the lone Gordon number, but the Phishiest cut on the album; no other Big Boat track offers bigger live-jam potential than this vehicle anchored in spooky guitar effects, layers of background vocals, and signature McConnell clavinet scratches.

The quartet gives critics the fuel they need for lyric-bashing in this cut, but these lines were not penned for those that cannot appreciate the idea of “vacu-uming.” This subtle monster bursts with abstract, carries a zombie-like tone to match its title, and will melt the face off of anyone that gives it a chance.

Track eight suggests the presence of longtime lyric collaborator Tom Marshall, and with that tendency comes a gorgeous composition that opens with Anastasio vocals and acoustic guitar. These give way to comforting McConnell riffs, light Fishman accompaniment, massaging Gordon bass bops, and -- what else -- the band’s frontman whistling the song to bed. “Running out of Time” reminds the listener that simplicity always has the potential to steal the show.

The third and final Big Boat cut that has seen its stage shoes christened bears the name “No Men in No Man’s Land.” More McConnell clav’, the album’s final inclusion of horns, and the crisp signature groove that Phish has polished and refined makes this dance ditty a bit that will kick the dust up in any general-admission setting.

Moving into the album’s final trio of songs, “Miss You” stands as perhaps the most impressive song the band has produced in over a decade. The musical, lyrical craftsmanship of this piece embodies the best of what songwriting can be, what it can mean, and what it can do. The magic of the studio always dazzles and this cut bears no exception. Phish’s tightness, harmony, and selflessness shine here, giving way to Anastasio working all facets of the guitar. This flawless product beckons eras a la The Basement Tapes; while doubtful, this gem could go undiscovered for years.

“I Always Wanted it This Way” serves as the record’s final McConnell cut, and the band placed this disco biscuit with precision. While Fishman delivers some boppin’ percussion, Anastasio lays some glossy electric chords, and Gordon drives the bus. This track takes keys and synths to depths beyond the abyss and back as it sends tracers across the mind’s eye, leaves lessons on the brain, and astonishes with galactic fashion.

Coming off of the explosive duo of the previous two cuts, Phish drops “More” in the 12-hole, and this one, while fun, uplifting, and -- well -- Phishy at its roots, serves as little more than a stepping stone to the album’s epilogue: a 13-minute-plus orchestral creation called “Petrichor.”

“More” has nice harmony, applause-worthy global examination, and huge encore potential, but “Petrichor” will steal any show. Described as that “pleasant smell that” sometimes “accompanies the first rain after a long period of warm, dry weather,” the curious term serves as a perfect match for this intense, chill-invoking composition.

Make no mistake: Live renditions of this piece will mean bathroom break for many showgoers, but the number chosen to close Big Boat has Grammy -- if an artist can win the award for incredible craft -- written all over it.

The opening sequence makes the eye well a touch. The second segment puts on a Phish costume for a moment then -- in the third -- orchestra meets Vermont jam band. The studio dressed up Anastasio’s voice in its Sunday best for some incredible segments that lead the piece into the storm, a portion described as “a fairy tale starring a lost pig.”

Accompanied by some exquisite stringwork, Anastasio’s guitar tries to lead the swine out of the darkness and into the light (a motif that resonates throughout the whole album), and the landing spot sounds like the heart of a second-set Phish acme.

A unique Anastasio soliloquy sets the stage for the tune’s homecoming: thick Gordon waves, clockwork Fishman time-keeping, and harmonic piano/guitar chops. By the time Anastasio delivers the closing refrain sequence, the level of euphoria peaks, and peaks, and peaks again. “Petrichor” is a masterpiece that will inspire 2:00-am kitchen dances, fist bumps to the air, and -- like the band’s 2009 title track -- joy.

Where, then, are fans left once they’ve stepped off of the Big Boat?

Joy meant just that seven years ago: the band was back, sober, and -- as time would tell -- crisper than ever. Fuego kept the fire burning, indeed proving they had juice left in that tank after all.

The latest installment suggests that the tank may have been refilled. Phish has dipped in to their tackle box and pulled out lures of 1989, bobbers from ’93, fancy spinners from ’96, and employed the casting techniques of ’98 and ’00. Their 2016 effort will go down as one for the ages.

(Editor's Note: Update (10/11/16, 10:06 pm CDT): Having now gotten my hands on an actual copy of the album and read the liner notes, Page McConnell has been credited for three tracks that I'd suspected to've been Gordon's.)
Posted by blairjjohnson at 9:06 AM