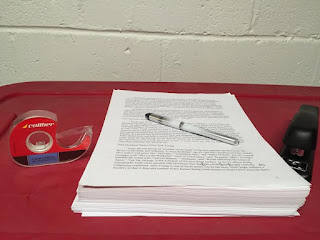 This project has been so many things: fun, hard work, eye-opening, redundant at times, and perhaps a touch self-serving and narcissistic.

I hope to keep the bigger-picture meaning of it in mind the next time I feel frustrated about something, and I hope it has, from time to time, been fun to read.

I definitely enjoyed writing it.

Twenty-Five: getting to the spot in a project where Europe’s “The Final Countdown” auto-plays in your head

Twenty-Four: rabbits in the yard

I like stepping out to see a bunny kickin’ it in the middle of the grass. Reminds me that property lines, fences, and yardwork don’t mean much to nature’s creatures.

(Update: Since writing this we discovered a rabbit’s burrow in the middle of our yard. For the first time in my life I avoided destroying the nesting place (with the mower) for several weeks and -- best I can tell -- all family members survived.)

I seem to recall a handful of people talking trash about the Royals television/radio play-by-play guy over the years, and I never understood it. I think “Ryno” has done a fantastic job for over 15 years in Kansas City. I’m thankful we have him, grateful he didn’t leave for that gig in Minnesota.

Since Kansas City’s baseball team turned the corner, the back half of their pitching staff has been the organizational glue, and they have been nothing shy of amazing to watch. Grateful to have had this time watching the “three-headed monster” known as Herrera-Davis-Holland (HDH).

(Note: Written prior to recent slump.)

These are a ton of work. They’re heavy on the stress and low on the fun, but when you pull one off it’s a great feeling. I’ve only been a part of two, but both were tremendous experiences.

Once I got enough of a handle on all of my Sunday work stuff I was able to get this still-new tradition reinstated. At first I thought the hiatus would be brief; that feeling had a quick shift to the sense that I’d never get it together again. Grateful that the light at the end of the tunnel showed itself.

Nineteen: the sound of my daughter’s feet on the basement stairs

When I hear those pitters and patters I know that the beautiful smile and incredible lap-hug cuddle of my daughter are seconds away. No better feeling.

Eighteen: the cat’s presence in our family life

I think our cat has an illness.

I think diabetes has settled in or perhaps his kidneys have begun to fail.

Life has not robbed him of age and I always knew this time would come.

We’ve not seen eye to eye for most of eight years, but we’ve also had our moments. I’m not thankful for the times I’ve treated him like a second-class citizen, but I am thankful my wife took him in, that my kids got to learn -- at an early age -- the basic difference between cats and dogs.

I’ve spoken about a yard guy and a mechanic. Perhaps more. Our most recent need involved plumbing. We’d found a good dude who came over to tell us some stuff and didn’t charge us. His reasoning was that we should call him when we had a need.

Our tub quit draining, and, well, a few other things ceased to function and so we called him. He responded, scheduled, arrived, and did the job.

One of the perks of my job has to do with going out of town and having someone else do your work. For odd reasons, that hasn’t happened for me in my all but two years, but it recently panned out. It was great to leave town with my family and do almost no work.

Have to have one. Lucky I do.

Fourteen: the best cover (by a thrown-together band) of all time

As much as I don’t want to, I have to admit that many of these entries touch on -- or are just plain about -- things that I like, things that I’ve written about before, and this particular entry is no exception.

I have watched this YouTube clip more than any other Internet thing I’ve ever viewed and it still brings me tremendous joy. So much love for its existence.

Thirteen: that no one in my family is crazy

Twelve: every friend I’ve ever had

Ten: that I’m not growing up with today’s music

Nine: the clarity to make a list of the things I want to do

Eight: the determination to address those things (even if I don’t have it right now)

Seven: the right to vote

Six: the pleasure of life

Five: the gift of being somewhat of a raconteur

Four: the peace of mind to always have that I-get-to-go-home mentality

Three: the luxury of being able to practice something and get better at it

Two: that people are interested (and participating) in preserving the world

One: finishing this, but knowing it’s never done
Posted by blairjjohnson at 1:53 PM