When writing, I try to avoid four things in general: use of "I," adverbs, passive verbs, and profanity.

On this historic day in America, all bets are off (Note: See? I just ended a sentence with a preposition.). 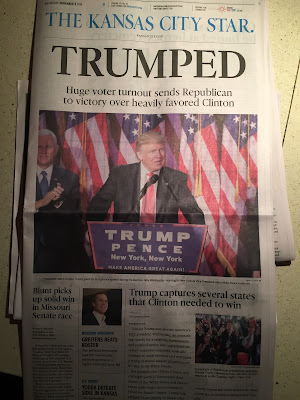 The struggle on 65th Terrace has never been realer.

I left the house at 3:30 this morning to get coffee and the two camps in my mind kept lobbying. Write nice, said one. Remain an optimist.

Fuck that, said the other. These fucking assholes deserve what’s coming. Problem is they’re too short-fucking-sided to recognize that they’re taking down the rest of us with them.

As you can see, the angry, profane side leads the polls.

Anyway…I woke about 45 minutes before my alarm went off and we were out of coffee, so I ventured out in my little portion of this embarrassing country.

Electricity still powered the neighborhood, my car started, and 7-11 was open. When I got home I stepped out onto my side porch for a Black and Mild puff and heard the train horn sound in the distance. I guess shit still works. For now.

I have never been a perfect human being and though I strive to better myself I have never aimed for perfection, for its impossibility remains obvious.

What I do strive for, however, hangs on betterment. For myself, for my family, for my community, and for the world my children -- our children -- will inherit.

I will show, now, in this moment, an example of my imperfection:

Fuck all five million-plus of you that -- under a fuel of will and veiled earnestness -- went to your polling places and cast a presidential vote for Donald Trump.

I have never -- in all my life -- felt as bipolar as I do this morning. I’m torn by the good inside me that wants to say that The United States of America will band together and fix this, that better and stronger minds will prevail.

My faith in such a camouflaged notion, however, has been vanquished by your selfish -- and let’s be honest: that’s all they are -- intentions.

The votes you cast for the Republican-party nominee yesterday did nothing to diminish the one percent; they expanded the distance between them and the rest of us. Hell, you put one of them in charge of us all.

This was not an exercise in rebelling against a broken two-party system. This fortified it.

You did nothing to channel the allegations and the empty promises of making America “great again.” In a technological age where information and disconnectedness loom, you further divided us. Whether our children should say them in their morning classrooms or not, you made the words “one nation, under God” an absolute farce.

Let’s face it, though: we weren’t one nation to begin with and we haven’t been for some time. Maybe ever.

This country was founded on two parties: loyalists and rebels. The rebels succeeded and did so with the motivation of creating a society in which one person (or group of people) would never reign supreme over others. How literally those initial two sets of ideas have become one another in a 240-year span.

I think some realize -- and have for a while now -- that Donald Trump is not the enemy. He never has been. Yes, it would appear that he is an idiot, a credential-less, mess of a person, and perhaps the least qualified to ever run for the largest public-office position in the land, but he is not the problem.

No, America -- that problem is you.

For you, my fellow citizens -- with your hatred, your vested interest in divisiveness, your wont for perpetual complaint over solution-seeking -- have always been there. You’ve lurked -- whether you realized it or not -- waiting for an opportunity to unleash your true colors, your urge commanding barks that say more should be yours.

You have -- in more instances than not -- thought of yourselves and shunned the notion that a higher power expects us to care for one another.

So, there. You got what you want. You have now elected someone that symbolizes what America can be: a place where wealth and power enable you to elevate yourself to no one else but your self.

It’s the blindness that astonishes me, though, people.

We’re averaging 71 years on this planet. We’re murdering people and paving shit and building cell towers, selling weapons (both legal and illegal) all to make ourselves better as individuals. For what?

So that your five decades of adulthood can be as indulgent and self-righteous as possible?

How can the mirror be summoned then nodded into with such fervent acknowledgement?

How can you enact daily operations on this planet without seeing other human beings and smiling at their existence, their struggles and their dreams? How can you sleep at night thinking only of yourself and your immediate family?

What becomes of all that is yours when the rest of the world ceases to fulfill the countless duties and obligations that make your existence a possibility?

I’ll tell you what becomes of it: your kingdom transforms in an instant from limitless to defined boundaries.

Anyway…the bright side for those of us that on the losing end of this morning’s news is that now your presence has been somewhat illuminated. It was no secret that you were out there, quietly supporting most of the police-brutality examples, stepping out from the shadows to take the occasional dig at Hillary Clinton, pretending that your favorite news sources share information without bias or platform.

I mean, we still can’t see you, per se, but the proverbial cat has stepped out of the bag. No longer will speculation regarding America’s status as a unified, progressive nation be a thing. You, my fellow executors of free will have punctuated the true nature of this country and shown the rest of the world just how off-kilter we are.

I wanted to say behind the times there, but second guessed.

Are we? Or are these the true times of the world in 2016? Are we -- as an existence -- meant to destroy ourselves sooner than the graces provided for us? It would appear so. It would appear that this planet was constructed or created with the possibility of longevity for humans in mind, but perhaps this has always been our destiny: to consume, to hoard, to posture, to hate, and to be destroyed by one other.

So no more hiding, people.

In time, anyway, most of you will admit that, on the eighth day of the 11th month in 2016, you voted -- with either a flag of support or a blanket of dubious hatred -- for Donald Trump. And you got what you wanted.

What most of you will never admit, however, is that the overriding feeling pushing you to make that democratic choice was fear.

And the time has come, a few handfuls of weeks before your choice takes office, to ask what it was that created that fear, that fostered its growth, that led its development to make this decision.

Was it black people? Did you do this because of African-Americans? Or minorities in general? Have you loathed the growing presence of non-whites that hold jobs of varying visibility? Or perhaps you see more of them asking for handouts on your neighborhood street corners?

Maybe the gays? Has your venom for the non-heterosexual seethed? Did it reach a boiling point with the ratification of their marriage privileges? Has your distaste for more people being “out” put you over the edge?

Or was it a transgender icon like Caitlyn Jenner that made you declare enough was enough?

Perhaps the “trans” part of that word requires omission. Perhaps the biggest issue in this country is anchored in sexism.

My assumption is that you lack the courage to admit any of this, that you will hide behind a smaller detail -- like your health-insurance premiums -- a retreat to the quiet ire that had built inside you.

I have a hunch that it was that root of all evil: avarice. You know. Money.

My even bigger hunch, though, was that it was a combination of all of the above. My gut tells me that the world -- and by “world” I mean your neck of the woods -- showed you too much. Too much non-youness. Too much of your own unhappiness festered, presenting itself in the form of a despicableness for others having a little bit of presence, of will, of American fortitude.

So own, then, that we have turned 180 degrees over the course of these 240 years. We’ve gone from not wanting someone else to tell us how to live to insisting that there be someone to do just that.
Admit that we took this independence thing a tad too far. Voice that your comfort within the state of things had evaporated, that your polling-place decision in 2016 will recalibrate your life, and that Donald Trump is the right person to lead that change.

Or continue -- as I suspect you will -- to cower behind the declaration that you couldn’t trust Clinton.

Either way, congratulations are in order to those of you that felt so certain that life in this country was tethered to misery. You’ve shown the rest of the world America’s true colors, Trump supporters.

God speed.
Posted by blairjjohnson at 6:25 AM