As the evening winds down, a new week begins, and the seventh month of working on this project comes to a close, I can't help but think about how much work we -- as people -- have to do to make this world a better place.

I don't understand how we got to where we did.

I don't understand why people hate, why they fear things different from what they value.

I don't understand the crime, the damage, and the pain some inflict upon others.

Somewhere -- I think -- in this mix called life lies an imbalance of energy.

We have to fix it.

We can't go on degrading, killing, and being unjust.

In a small meeting a couple of weeks ago, the president of my company suggested that we -- as sales people -- should focus on what we can get as opposed to that which we cannot.

It didn't hit me at first, but later, I realized that I've directed a lot of my energy in the direction of the cases I can't get (or haven't gotten yet, I always think) instead of focusing on the ones I can.

This feels analogous to the human experience, and now that I think about it, a lot of what Lao Tzu wrote in the Tao Te Ching. We should focus our energy on what we have, not that which we lack.

I'll get down off of my soap box now, but I think this starts with giving thanks.

This project has shown me the abundance of things for which I am grateful.

As always that begins with my ability. It includes my time, my computer, my mind, my paper, my printer, my Internet connection. It involves my dictionary, my pen, my family, my friends, and it involves you, the reader.

This guy has always contended for the best-writer-I’ve-ever-known title, and from time to time he puts his talent to use.

A couple of weeks ago he did so, putting the finishing touches on a blog post about the death of his former brother-in-law. Read it here if you haven’t already.

I’ve concluded that I cannot make him write. Hell, I struggle to summon the motivation to put my own ass in the chair each week.

It takes focus, determination, and perseverance to do it, and it -- in this stage, anyway -- comes with little notice or recognition.

You have to learn to be at peace with that last part, a goal for which I continue to strive.

The point, though, has everything to do with my friend’s gift, and my blessing for the luxury of enjoying it.

Before I sat down this evening, I had never before crafted a work of 100,000 words.

My previous total fell somewhere in the 30-40K range, I think.

I’m pretty pleased with my new output sum, and happy -- not that the large number really matters -- that it will grow as I continue to work on this project.

It means -- if nothing else -- that I possess the ability to execute.

As I work toward the two-year anniversary at my job, my weeks seem to get busier with every seven-day stretch. I find it challenging to close the work machine, but know that I must. I have to detach or else I would work day and night. This would not be a good thing. I’m grateful for each day’s moment when I turn it off.

A dream it's true,
But I'd see it through.
If I could be,
Wasting my time with you.

So if I'm inside your head,
Don't believe what you might have read.
You'll see what I might have said.
To hear it.
Come waste your time with me.

Good gravy, I would’ve lost my freaking mind by age 11 if these drugs hadn’t been invented.

Three Hundred Ninety-Three: living a life that provides me with the opportunity (when I take it) to exercise

We have a queen. We may upgrade to a king at some point. My wife thinks our bed sucks. She thinks it hurts her shoulder. I’ve never owned a nicer bed in all my life. It’s 11 years old now and, in comparison to the saggy pile in our guest room, could be listed as in mint condition if we wanted to sell it on Craigslist.

Some time before we wed, my wife fronted me the grand I needed to buy it. I worked 10 extra shifts for a former executive chef of mine to earn the money. I have ties to this bed, and will have to let them go. It has served me, and us, well.

The other night, after I mowed and weedeated, and ran the blower, I entered the house, filthy and miserable because of allergies. As I closed the door I heard the tub water begin to run in our bathroom and felt ire perc’ in my gut. Then I remembered we have two showers. My next reaction had to do with the fear of scalding my children if I fired up a water source while my wife bathed them. I asked her to wait then discovered their water temperature had gone unaffected.

Two showers. What a luxury.

Greatest gift ever? Maybe, but I won’t bore you with the details. I will, however, share with you, the opening to Phish’s return from their breakup. If you can spare the (first) five minutes (of the clip), you will enjoy people experiencing a source of bliss they’d been without for five years:

I’ve come around on this product since starting this project in November. I’ve come to the conclusion that Pandora’s perfect for any evening writing I might do; Spotify’s the choice for the early hours.

The other morning I chose a playlist called Deep Focus and it played a song called “Light the Night” by Tracie Chattaway.

It took me 35 minutes of sitting and fidgeting to get that last entry, those first words of the morning written. Sometimes that’s just how it be.

In the moments (Note: I think. Who knows. Coulda been hours.) before I woke I had one of those bizarre dreams where a seemingly insurmountable challenge stays the focus of the entire dream.

This one took place in this three-story house, and the bottom half of the first floor resembled the McCoy’s Public House kitchen, pre-remodel. My crew and I -- a ragtag array of people like Chris Hamilton, Eric Hart, and my mom -- kept coming in in the mornings to swampy, pathetic closes from the night staff, and no matter what we tried, we could not get the Pantry station stocked and prepped.

We had a 3:00 deadline because some shower for my sister and her friends had to have the whole place to themselves. Oh, and I think the house belonged to Pat and Jim O’Hagan, but it didn’t look like anyplace I’ve ever seen them live.

Nevertheless, there’d be general disorganization, disarray, and dirty dishes heading into our cutoff time, and members of my staff would have to leave early for stupid reasons, leaving me with dozens of tasks to accomplish in a 15-minute window.

Like the sheet tray on the roof, for example.

Three Hundred Eighty-Seven: recognizing the cheese in something you love

You ever love something but can’t love it all the way because it’s a little (or a lot) cheesy? I hate that.

I’ve had this feeling about a number of things, but perhaps the best example takes me back 28 years to the day I went to the movies with my mom and her pal Jan Willoughby. They procured tickets for Peggy Sue Got Married. I entered the theater that would show Over the Top. I loved that movie. I still love that movie.

I have never been able to love that movie all the way. Too scripted, too cheesy, and some putrid acting by David Mendenhall.

It’s one of those things you love on the inside.

Maybe it comes up in a social setting and people knock it. Maybe you smile or contribute a neutral comment to the conversation.

It’s one of those things you would do 100 percent of the times in which you were presented with the opportunity to do it, i.e. (in this case) watch that movie. I would watch Over the Top 10 out of 10 times…unless something better came along.

Or at least I am.

Speaking of the awesomely terrible 1980s…

Speaking of the awesomely terrible, this flick earned an all-time-favorite spot many years ago. Hard to say who’s worse -- Lori Petty, Keanu Reaves, Gary Busey, Patrick Swayze -- in it; hard to think of a better film.

I don’t care if it makes me a gringo, all of this soft-white-corn tortilla business has got to stop. I don’t care what kind of badassery you’ve rigged as a filling. If you’re not making your soft tacos with flour torts (or going crispy with good, old-fashioned yellow corn), you’re doing it wrong.

I remember a time when I thought these cats would record like 15 albums.

Turns out they only made four (and I only own the first three).

Those were some dope beats, though, man.

Sharing something you grew up loving with your children might rein as the most powerful human experience. I didn’t know why I loved Where the Sidewalk Ends, The Giving Tree, A Light in the Attic, and The Missing Piece as a boy, but I didn’t have to know; I just loved them.

I could follow the linearity of The Giving Tree, and I could be confused about why the tree would give and why the boy would take and why this giving and taking would result in unconditional joy for the tree, but I accepted these things as symbols for how some segment of the world operated, some segment that I might one day understand.

I could follow the meter and the rhyme and the goofiness of Where the Sidewalk Ends, even if I didn’t understand why this curious author with the huge picture of his big bald head on the back would pen such lines. I, without knowing it, got that he did so for readership enjoyment. 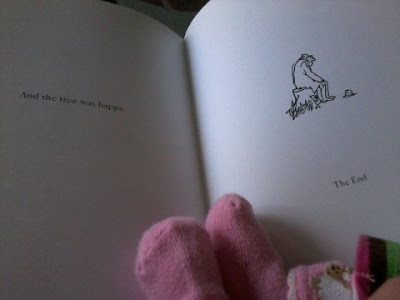 I can’t imagine the world of books without Shel Silverstein’s publications in it.

Is this concept the true one thing for which we live? Have we assigned more value to it than we intended? Will a spectrum for measuring it ever exist, or will it forever remain intangible?

Do we even have a definition for love?

To what extent have we grown accustomed to the overuse of the word?

My experiences and feelings tell me that this thing -- this feeling and emotion -- rides some imaginary arc anchored in the subjective, but that at its root, we remain stumped to find something more powerful.

I love pizza, karma, and comedy, for example, but those things -- even though I use the same verb for them -- don’t belong in the same conversation as how I feel about my wife, my kids, and my family.

Love’s power appears to know no bounds. It makes why we live worth living.

Three Hundred Seventy-Seven: knowing that physical-appearance conscientiousness means, in the end, nothing

Somewhere along the tracks of my youth, I developed a concern for the way I looked. My hair, my teeth, my face, my body, my clothes. None of it ever satisfied.

As an old man I’ve whittled that down to my body.

It sucks having a hairy torso, a flabby gut, and legs that make White Out look tan.

I haven’t figured out how to not stress about this shit, but I’m working on it. At the very least, I give thanks for the knowledge that, in the end, it doesn’t matter. What matters has everything to do with integrity and how you treat people, not how much wax and sunscreen you need. I’ll get there. I think.

If you think back to the old dial-the-landline-and-hope-they’re-home days, cell phones -- and especially texting -- revolutionized communication.