Nothing should feel weird at this point, but I gotta say it feels odd to knock out another hundred. I feel grateful that things to be grateful about keep rolling in as I post these. I even had a few rain down on me while editing this section, so, depending on how long my children nap, I made get two up today.

Having typed that I expect to hear one or see the other within the next six minutes.

Anyway, I've found -- here in the last couple of months -- that my biggest challenge hinges on the proverbial practicing of that which I preach. Like before lunch today when my son's fatigue and hunger dictated his behavior. I grew short with him and bordered on mean.

Treating him that way measures as the opposite of fair. It's short-sighted and lame of me, and I'm stuck in this rut of recognizing it after the fact instead of just before it happens. Perhaps I need to practice graciousness instead of worrying about writing about it.

Thanks, as always, though, for reading, and send me vibes of strength and patience. I need little else in life right now.

Two thousand messages purged. Took me two hours, but I felt like a new man.

Four Hundred Twenty-Four: random quote #2 (that my mother-in-law sent me (that I found while cleaning out my e-mail inbox)):

“Gratitude unlocks the fullness of life. It turns what we have into enough, and more.  It turns denial into acceptance, chaos into order, confusion to clarity. It can turn a meal into a feast, a house into a home, a stranger into a friend. Gratitude makes sense of our past, brings peace for today and creates a vision for tomorrow.”

I received that quote on November 25, four days after I started this project.

At a work function the other night, a restaurateur had plans for his new concept on display. I realized that my eyes -- in immediate observation of the design/engineer plans -- take first note of the language, not the images. I realized that I realized this because the first thing I saw on the plans: the quote/unquote words: “dinning room.” The owner did not appreciate my prompt attention to this error.

Moreover, when copying and pasting that Melody Beattie quote, I noticed that she used two spaces between sentences before I noted any meaning in the passage.

I give thanks to this odd tendency because it reaffirms my passion for the written language.

Four Hundred Twenty-One: my children’s love for one another

I already noted that they can play well together in the morning, but our daughter returned home from a recent sleepover and the hour of playing with her brother that ensued contained the sounds of constant joy, as if to say that they had missed each other’s company. So grateful for that.

I hadn’t used it yet at the time I wrote this because Kansas City had decided to become Seattle’s second sister, but I couldn’t wait for the sun to come out and that sky to blue. Good times. (Note: It was everything and more.)

Love when my boy laughs. Might be the purest form of joy out there.

Four Hundred Seventeen: the sounds of crickets at night

Gives you that world’s-getting-ready-for-bed feeling.

I realize that this is not nice of me, but I come from a place of being someone who used to feel the need to fib or tell the truth or tell a tall tale to enhance my image.

Some time ago I graduated from that and decided to be quasi-fine with who I was, that -- for the most part -- I wouldn’t concern myself with people’s opinions of me. This is still a work in progress and I don’t know that I’ll ever get all the way there, but it’s an awareness thing.

I’m thankful for the awareness that led me in the direction of being honest. Or at least trying to be.

Anna’s worked hard since getting her M.A. She’s done the intern thing, the supervision gig. She went through the stepping-stone-job phase, and networked to advance herself out of it. She’s grown her client load. She’s helped people succeed. She’s done trainings, and had a supervisee. She continues to workshop and learn, and she's even published a book. She might be on the cusp of entering the next realm, and I don’t even know what that is, but I know I’m proud of her.

Four Hundred Fourteen: knowing that I’m not the self-centeredest person out there

I have had two former colleagues -- one school, one work -- get their writing endeavors off the ground by undertaking graphic-novel projects. I have supported both of them, just as I would hope that they would support me in my writing efforts. Only, best I can tell, they don’t.

I realize that their projects involve a tangible finished product and that mine, for now, has more to do with just plain readership, but I don’t even think they read. If they do it’s news to me.

I try not to let frustration get the best of me in these situations, but it’s tough.

I won’t let it foil my outlook, though. I will continue to support people I know that pursue their dreams, even if the effort doesn’t generate reciprocation.

It shouldn’t come as a surprise that I might like this music. After all I got way into acid jazz and the DJ thing for a while. This isn’t much of a leap, but I didn’t think I would like it. I think I do, though. I think I do.

This dude, a man that tried on several nicknames before one stuck with him forever, is an amazing guy. Has been for as long as I’ve known him.

He keeps getting killer gigs in L.A., then quitting said killer gigs for better killer gigs. His professional life appears to really be on the rise right now and I couldn’t be prouder of him. He also has a beautiful wife and two gorgeous children with her.

My only gripe about this cat is that we (and I do mean “we”) don’t communicate often enough or see one another often enough. Geography and, well, life, both make that hard, but I always walk away from our encounters feeling like my life is richer than it had been the previous day.

Pleased to still call this guy a friend.

This clip (or episode, for that matter) probably won’t make any sense if you’ve never heard of the “Dog, the Bounty Hunter” show. Lemme help you out with that:

Whether the kids are napping (Note: My son -- no exaggeration -- hollered between the typing of the ‘n’ and the ‘g’ in napping. That’s how short these windows are.) or nobody’s home, nothing beats a quiet house. In small doses, of course. It’d be depressing if there was never anything happening here.

Sometimes I lack patience with Adeline. Always she forgives me, tells me that she loves me, let’s me know I’m her buddy, professes that I’m “the sweetest daddy in the world.” I don’t deserve this more often than I do. That I’m granted free pass after free pass, I am grateful.

Four Hundred Eight: my visit with the Stanley Cup

About 10 years ago the Stanley Cup came to Kansas City and was made available for viewing at Crown Center. I went with my then-girlfriend/now-wife, Anna, and our friend Matt. Someone took pictures and where they lie remains a mystery. I, however, did not touch the holy grail of professional sports, and I’m glad I displayed the necessary restraint in that scenario. I cannot say the same for the rest of my company, but that’s okay.

Some people don’t like this guy. I don’t get why. I think he does a marvelous job. Glad he’s part of the NBC crew.

With my son I have lacked patience and understanding for most portions of his 21-month-long life.

Sometimes I feel like the hugest piece of shit on the planet because I have unreal expectations of him. Sometimes, after we’ve all but closed the day’s chapter, I rock him and wish him sweet dreams. I tell him I love him. I thank him for his sweetness, and I apologize for being so short-fused.

When I greet him in the morning I see joy on his face, an experience that never fails to yield both relief and another silent layer of guilt. 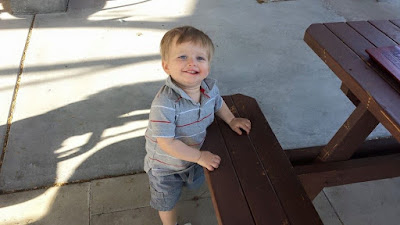 I have so much work to do at becoming a boy dad. I hope I can improve before I cause him mental harm. For now I give thanks for his happiness.

Four Hundred Five: waking up to a fresh start

My wife spent most of a week in New York in early June. This spring brought memorable amounts of rain, and one of that week’s nights produced insane thunder claps and egregious doses of lightning. This occurred during a stretch of struggle for my daughter regarding sleeping through the night in her own bed/feeling safe in her room “without an adult.”

I feared this night’s storm would send her down the hall, creating a tough spot considering we’d discussed the previous night that she could climb into bed with me if she promised she’d stay in hers the next, and it did.

A twist of irony came in the form of me waking up to pee and getting in to bed not feeling well just before she entered. This made it easy to cave, and I hoisted her up onto the mattress and tucked her in, feeling a touch better already due to her presence.

I could not, however, settle enough to fall back asleep, having already allowed a panic -- her mom, grandmother, and grandfather were all out of town at the same time -- to sprout in my head. Via the helpfulness of a YouTube guided sleep meditation I found my eventual way back into the sweet, sweet darkness.

When the wails of my son stirred me a few hours later, I opened my eyes, still tired, but feeling better, and for that fresh-start feeling of not having failed my children and died while they rested under my care, I give thanks.

I know. I already mentioned it and I already penned a YouTube gratitude, but at this point in the game I’m taking them where I can get them.

Four Hundred Three: a vision of where (and who) I want to be

Taking the steps to get there must make up 95 percent of the battle, but you have to start somewhere and that somewhere -- now, for me -- remains a vision. For that much I give thanks.

Four Hundred Two: David Steinberg’s book, This Has All Been Wonderful

I didn’t even know this thing existed, but my wife surprised me with it for Christmas. The little publication covers Phish’s 1994 summer tour, and when I realized that, I flipped to the chapter that covers my first show. Each chapter has an introductory one-liner to preview the contents of the following few pages. For my first show, Steinberg writes “Phish plays the best show of their career and no one notices.”

Compared to many (Steinberg notwithstanding), I haven’t seen a ton of shows, but I’ve always felt -- aside from the fact that it was my first -- that that evening in Morrison, CO contained a special sort of something. I’ve felt that way for 21 years now, and it’s nice to have the proverbial seasoned vet verify that feeling.

Four Hundred One: being a single dad for five days


As the waning hours to my wife’s pending return from her Big Apple travels lapsed, I gave thanks for having such wonderful children, a wife that manages so much in our daily lives, and the ability to juggle work and meals and showers and school and activities and needs and wants and the like, even if it wasn’t even a full week.
Posted by blairjjohnson at 2:55 PM