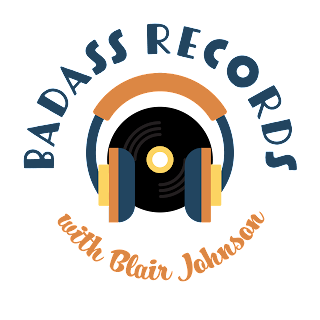 I think I took all of my frustrations with the #TeamUSA hockey results out on the driveway snow. Having had a handful of hours to process the women's loss (and a little bit longer to stomach the men's), I've moved on (kind of) and am redirecting my focus on a project that appears to finally have a little bit of life in it.
And besides, my custom-made USA Hockey flag should be arriving this evening, so...Yay, timing!

In fact, you've probably heard me run my stupid mouth about it a time or two across the last 11 months. And for that, I sincerely apologize. I honestly think that my dumb brain makes me say annoying shit to people so that I can then try to understand a scenario better or narrow my focus to see the next step through or hurdle some kind of road block.

It's a weird feeling to feel annoyed with yourself because you can't unsubscribe from certain thought clusters up there in the ol' noggin. So, seriously...if you're sick of hearing about it, so am I. I promise.

Anyway, I managed to record an episode (and schedule several more), and it's live out there on the Internet, but more on that in a sec'.

The project's birthplace is something of a fascinating quip, I presume. Apparently when my grandmother died, there was a funds distribution. I think I kinda knew about it when it happened, but when it happened, I kinda didn't know about any money things because my ex-wife handled all of that stuff. So when we got to the division-of-assets portion (Note: Highly recommend. Super-fun.) of our marriage dissolution, I was voluntold that these particular funds were considered "liquid," and that we should cash them out and split 'em down the middle. So, that's what we did.

With my half, I put down new carpet in the house, upgraded the existing man cave, and outfitted it with equipment for the project. I dunno what she did with hers. Probably bought some more yoga pants or something. Or maybe she chiseled away at our overdue taxes. Who knows.

Point being, I'm not handy, so by "upgraded," I mean I wrote a dude a pair of checks and tried to direct the energy of the dumpster fire that resulted from that hire into something positive, something comedic. It was too late to turn back; starting over was not an option.

So, there were people filthing up my house for a bit... 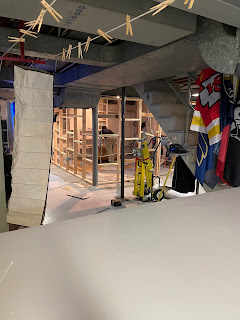 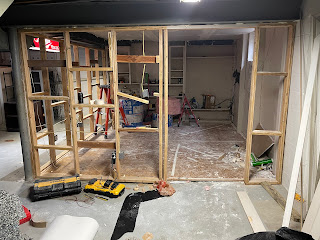 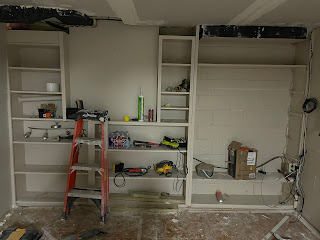 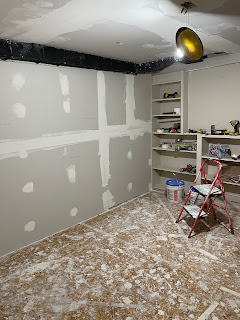 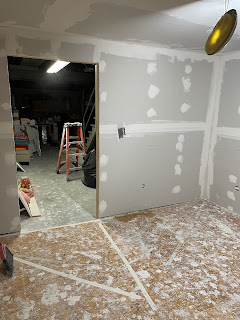 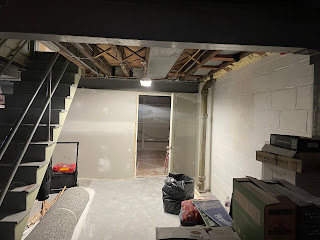 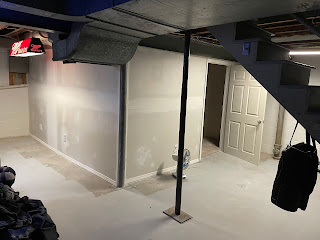 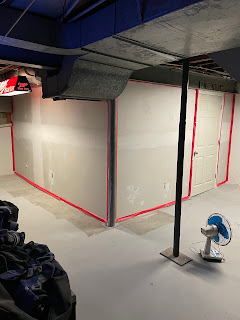 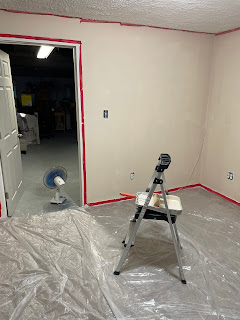 ...and built a table out of an old, framed door that'd been sitting behind my furnace for -- at minimum -- the nine years that I know of... 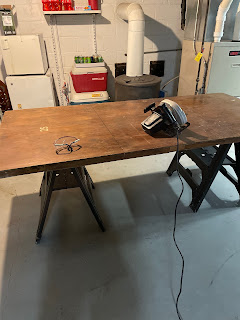 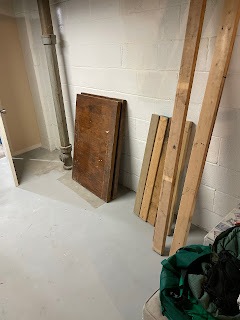 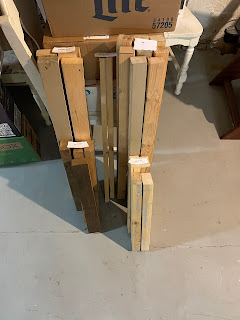 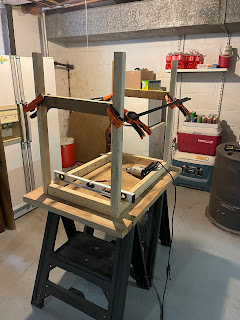 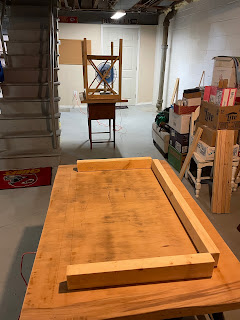 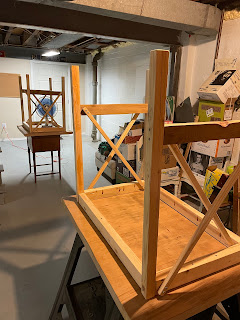 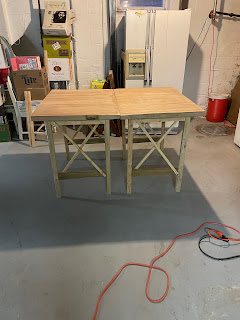 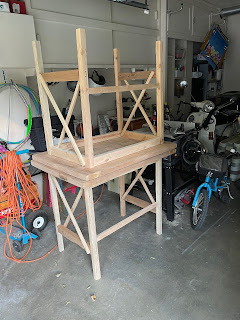 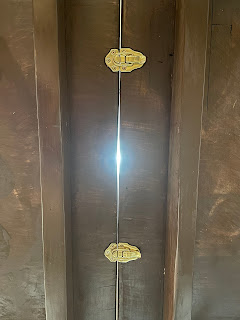 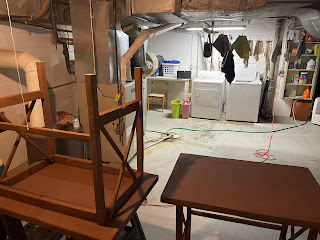 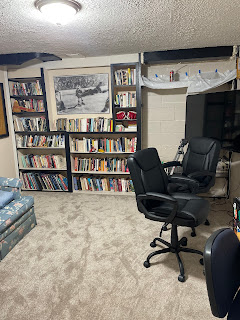 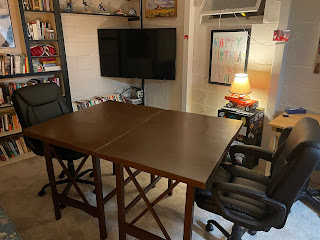 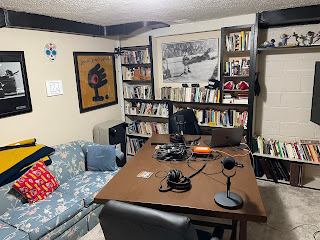 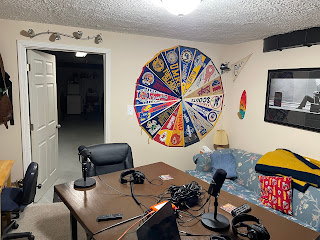 ...and always took an uber-nerdy level of pride in crossing stuff off of my list: 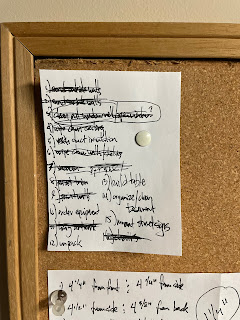 Then it was time to figure out how the fuck to do any of this shit, which was a pretty massive freaking oversight on my part. When your left-brain ceiling involves times tables and photosynthesis, it's probably never a good idea to purchase an expensive device you've got zero familiarity with to power a bunch of gear you have zero business operating. And yet -- somehow -- here I am.

In this case, "somehow" is code for, My cousin Bob generously donated his time on multiple occasions and taught me enough to prevent a self-administered lobotomy from happening all over my nice, new carpet.

Seriously, though. I'd have no reason to be typing these words right now, were it not for him.

So, like I said: The first episode is alive and complete. We lost video pretty early on, but were able to literally joke about it a time or two during the conversation. That's hopefully remedied, and the next episode will be better, and so will the third, and so on and so forth. Also, my daughter produced the intro video, which might be my favorite part of the whole endeavor.

That's it, though. The podcast is about people and music. It's got official artwork, and a Web site (where you can maybe listen to the audio version of episode #1 soon; video's up now), and a YouTube channel, and all that shit. It's not any other places right now, but who knows...maybe official distribution feels warranted once I've got a few more episodes under my belt.

As of right now, I'm not going to make a Facebook page for the thing, but it does have an Instagram, and a Twitter, and a TikTok. Maybe you wanna follow one o' those. Maybe ya' don't. We'll see how much posting on the latter of those three happens anytime soon.

Anyway, that's all I wanted to do was tell you about it. Maybe you'll join in and have a listen. Maybe you'll want to do an episode with me. Maybe you'll tell your friends. Maybe you won't do any o' that shit, 'cause life is busy and hard and we all have our own bandwidth to manage. If you do do any of that stuff, though, I hope you enjoy. It was really fun to make.

Posted by blairjjohnson at 7:45 PM