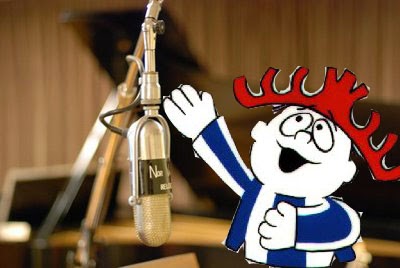 Counted my Sochi 2014 chickens before they hatched by writing a rap about the United States men’s hockey team winning gold. My plans -- obviously -- derailed yesterday, but I’m proud of how far the sport has come in our country, and I was proud enough of the lyrics I’d written to connect with a rapper dude I know to discuss recording it.

He booked us some studio time, and when the United States lost to Canada yesterday, I hung out on the scrap-the-whole-thing fence for the entire afternoon and evening. Late last night I decided to go through with it and put my humility with my hockey team: on the line. I’ve been supporting them for so long that it wouldn’t be fair to leave them hanging after defeat.

Edits, then, were necessary as I, in the wee hours of the morning, wrote the final verse under the presumption that we would beat Finland this morning in the bronze-medal game. This, of course, was foolish of me, as a second round of edits was necessary, but I think that I subconsciously wrote that final verse with the distinct possibility of losing in mind.

So I went to Lew’s and set up to cook breakfast for any bronze-medal-game patrons that might’ve shown (Editor’s Note: Two did.), and when it was obvious breakfast wasn’t going to happen, I split. After a failed attempt to get a hold of said rapper dude, I looked up the studio information on my own and went out there. I got in touch with the guy, recorded about five takes, and watched him work his magic.

And now I’m ready to share with you, in all its atrociousness, my rapping debut. But first, a few notes:

1)      The rapper dude was supposed to rap. I was maybe -- maybe -- going to help fill some of the chorus lines, but let’s just say I was not born with the gift of song. I can write the stuff, but the melody and the tune-carrying is a gig meant for someone else. Unless that somebody else doesn't show. Then, unfortunately for everyone, it's on me.

2)      Mike Bailey at Industry Soundz is a solid guy. Wicked nice, patient, and helpful. Good attributes for being in this business, I imagine. So use him. He’s on Facebook and Twitter.

3)      The music belongs to Too $hort. I didn’t write or record one lick of it. It’s an instrumental version of his song, “The Ghetto.” Only the lyrics in the below version are mine. I don’t mention this because of copyright. I mention it because he’s one of the most important rappers in the genre’s history, and while he wrote a lot of songs about things you’d expect rappers to write songs about, he wrote some important songs, too, and this one might be one of the most important rap songs of all time.

It’s beautifully crafted and about a piece of society that -- as the song states -- gets overlooked, and I don’t want my rhymes (Note: Yes, I sad that just to say it. ‘Cause I could.) to come across as a parody or a mockery of the song. $hort’s verses in the track command a respect unworthy of many rappers, carry a swift power countless numbers will never touch. A lot of the songs he’s recorded over the years have tapped levels of profanity and lewdness unfit for many an ear, which is fine by me, but that's not the case in this one. It’s pure, it’s real, and if you’ve never heard it, find it and listen to it.


I make no apologies for this. United States hockey is my passion. Sticks and stones, people. Sticks. And stones.
Posted by blairjjohnson at 5:28 PM